Let me see, you are going to Cambodia because you want to visit Angkor Wat and you happen to be an adventurer, well, congratulations! 🙂 Cambodia is a great country for hitchhiking, especially for the north of Cambodia.

Compared to Thailand or Vietnam, Cambodia is visibly poorer and the road condition is thus worse than Thailand, but still better than Laos. There are not many high mountains like in Northern Laos where I almost died. There are some hills in the north but that is not of a concern.

In Cambodia they drive on the right side, like most countries in the world and unlike the neighboring Thailand. 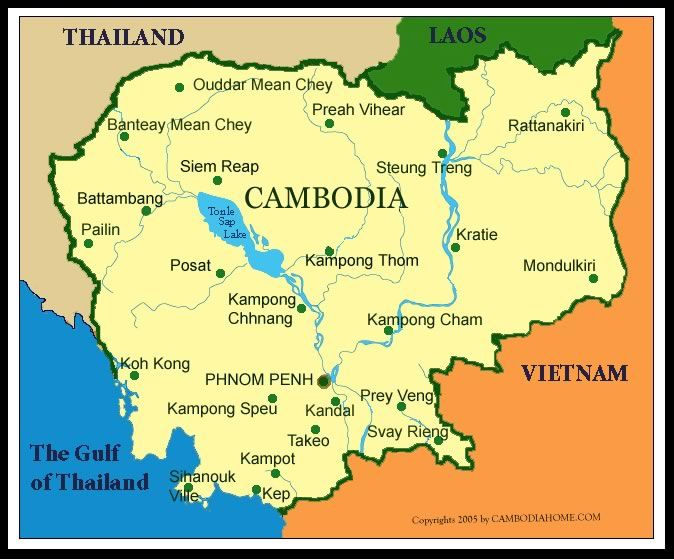 The ease of hitchhiking in the North and the South is different. North of Siem Reap up to the border with Thailand is a region easiest to hitchhike in the whole SEA (except Myanmar)! WOWO! I had the best hitchhiking experience.

This region is less populated, less touristic. more rural, more polluted and people there are much kinder than in big cities like Siem Reap or Phnom Penh. I was offered food and accommodation several times. They hardly saw any tourists. When they saw me, many were genuinely surprised to see a foreigner. In Anlong Veng a local taxi driver hosted me at his simple home. Her wife even spoke some Chinese as she worked in Singapore for a while. I am forever grateful to the nice people there.

When I was hitchhiking there, nobody ever asked for money. I hitchhiked scooters, buses, vans, motorcycles, bicycles, 3-wheelers and of course, regular cars and everybody was so kind to me.

In the region south to Siem Reap, Siem Reap included, it is more populated, urban, polluted, touristic and it happens that the driver will ask money from you. So it is necessary to explain that you are trying to hitchhike.

This region is in general more difficult to hitchhike than North Cambodia.

Siem Reap and Phnom Penh are very touristic, especially Siem Reap, where the Angkor Wat is located, but once you go north beyond Siem Reap. However, I must add that even in this region the majority of the locals are kind and helpful. The vast region between these two major cities features many small towns and villages. The people in this less developed area are kinder than in big cities.

Is it common to hitchhike in Cambodia?

Nope! Hitchhiking is not a common practice in Cambodia and those who hitchhike are almost exclusively travelers from western countries. In general, one sees less hitchhikers in Cambodia than in Thailand. As there are less tourists, the roads are worse and the price of transport is cheaper than in Thailand.

Is it safe to travel in Cambodia?

YES! In general I would say yes. Like Buddhist Thailand, Cambodian people are also a gentle nation with long Buddhist tradition. Although they suffered much from the Communist persecution, they preserved their gentleness. If you can travel in Thailand, a country with a murder rate of 3.51/100 000 inhabitants, then Cambodia is definitely no problem for you. With a murder rate of 1.84/100 000 inhabitants, Cambodia is almost a bit safer than Belgium and a bit more dangerous than Bulgaria, ranking 152 worldwide on murder rate. So no worries. 🙂

Caution is nonetheless necessary. There are minor crimes against tourists, especially in Siem Reap and Phnom Penh, but if you are careful, you will be fine. When I was staying at a police station in Siem Reap, I met an Ukrainian couple who were also sleeping there. The girl happened to put her camera and wallet on one arm and they were snatched by robbers on a motorcycle. She lost all her money, her passport and of course her camera and SD disk…… Always try to carry your lovely camera cross breasted or on your neck and in the front. Keep your money and passport separate and in some pockets difficult to reach for others.

In Siem Reap, as it was the place where Angkor Wat was, they have professional tourism police who speak pretty OK English. You can always ask them for help. For example, if you are going to camp, you can ask if you can camp inside the police station yard. If you are driving a camper van, then you can ask to stay in the police station.

How to hitchhike in Cambodia?

As there is no local hitchhiking culture like in Pakistani Kashmir, the thumbing up pose is not generally accepted. If you thumb up on the road side, drivers would just think: ‘Look! That guy/girl is saying I am awesome! He gave me a thumb! Yeah!’ Nope, that won’t work.

There are 3 ways you can do this right.

When should I go hitchhiking in Cambodia?

As most SEA (South East Asia) countries, it is hot all year round. Unlike Thailand, officially Cambodia has 2 seasons.

Obviously, the best months for hitchhiking in Cambodia would be the dry season, especially Jan and Feb.

You see, when you visit Angkor Wat, it is very popular for tourists to rent a bicycle or motorcycle to go around different temples. There are many ancient temples and they are spread out everywhere in the forest. I know, it is beautiful and mysterious. Because of the large number of bicycles, it is possible to hitchhike a bicycle. I personally did it. An American girl took me. We took turns to peddle. It was great fun! I left her when her boyfriend was showing palpable jealousy. You know, I am a nice guy. 🙂

What are the major challenges of hitchhiking in Thailand?

Will I have problem with the police when I hitchhike?

In general nope! As long as you don’t hitchhike naked or do drugs in the middle of the road (or other over-the-top crazy shit), the police will not harass you. If you are nice enough, the police will even help you to get a ride, which happened to me. So no worries about the police. It is the US after all. I just read the news of a bunch of backpacker arrested for ‘pornographic dancing‘ in Siem Reap, so be careful and know the boundaries.

How can I sleep?

Couchsurfing is basically non-existent, a situation similar to Laos. Although I did manage to couchsurf in Siem Reap, through the introduction of a friend. The host was a boxer from Belarus. You get it, many of the members of local couchsurfing there are expats living in Cambodia.

In the North, you can easily find either Buddhist monasteries or villagers’ yards to camp. If you explain to them and do not look like a serial killer, they will even invite you home. That happened to me twice and I was thoroughly touched. The second time they even cooked a big meal with crabs and shrimps for me. Seriously, I loved those kind people. Right now I am thinking about how to become a millionaire and go back to thank them with a banquet. 🙂

In the South, it is also possible to do the same but try to avoid big cities. Camping inside cities is possible, but be careful if it is in Phnom Penh or Siem Reap. If you really get stuck in one of those two big cities and even do not have a tent. Three options: hostels, police stations and Buddhist monasteries. I was too gullible and was led by a homeless guy to a deserted ground. I slept there but the next day I found out my hard disk and other valuables were gone…… I was heartbroken…… So you be careful!

As for Buddhist monasteries, a few more words are needed. Buddhist monasteries are perhaps the best choice for sleeping. Almost in every village you can find one, then asking politely they can give you a piece of floor, a bed or even or a room. You can always thank them by your own means, such as cleaning the hallway, or help cooking the meal. It is great fun to interact with them and then you also feel you are not just a begpacker. However, if you are a solo female, be careful they might refuse you refugee in the monasteries as letting a solo female lodging there might be against the Buddhist discipline.

I personally slept in Buddhist monasteries more than once and they are in general very kind to me, much kinder than in Thailand, where the monks are already quite corrupt. Sometimes the Khmer monks are more afraid of strange foreigners than in Thailand and thus might refuse your request. Do not be frustrated. If you really desperately need accommodation, then find one of those motorcycle taxis on the street and ask them to drive you to a hotel. They all understand the word hotel and you can even do the sign of sleeping with your two hands under your head. It is universal and they know where to find hotels.

Other information about hitchhiking in Cambodia

I feel the Cambodians are better Buddhists than the Thai, but with less means, as their country is poorer and they suffered more in history. In general the people are very helpful and hospitable, they even go out of their way to help you.

Recently there has been a crackdown on begpackers in SEA, so try to be respectful and not leave terrible impression about hitchhikers there. After all, not just you, those after you also want to hitchhike there. Let’s make it sustainable.

Useful phrases for hitchhiking in Cambodia

How to explain that you are hitchhiking:

How to explain that you want to sleep or camp there