The Fairy-like Couple in the East German Forest

On a sunny morning, I said goodbye to Lotte, who was studying in the new university building designed by Daniel Liebskind. and set out hitchhiking to Riebau for the gathering of hitchhikers. Before I left, Lotte gave me a bottle of chocolate paste to share with other hitchhikers I would meet at the hitchgathering in Riebau.

After ten minutes I found a gas station and many cars were there to charge fuel.  ‘Snug! It is a perfect location for hitchhiking!’ I thought happily, ‘What a beautiful start of the day!’

However, it still took me one hour to find a driver who would take me 5 km further.

Lesson learned: never be too optimistic! Things are not as easy or snug as they seem!

This part of Germany was very rural. One could only see villages and fields, enormous fields and small villages. When in Luneburg, I heard from a few people that in this part of Germany still lived the old Wendish villagers. They were a west Slavic people who lived here since Middle Ages or even earlier. Right, they were not Germanic like the Germans. Their culture and language was more similar to the Poles. During the expansion of Germanic people to the east in the high middle ages, those Slavic lands were gradually conquered and became German. Now only some Wendish villages left.

So, how do these Wendish villages look like? It was a typical thing for a Wendish village to have a big tree at the center, then all the houses just surrounded the tree, a tradition unchanged from one thousand years ago.

It was beautiful to hitchhike there, even when one got stuck. And yes, I got stuck for a while and started appreciating the beauty of the surroundings. It became perfectly OK to get stuck.

Perhaps you do not know about it, but although Germany has been reunified since the fall of the Berlin Wall in 1989, East Germany is still obviously less developed than West Germany. The division between these two regions is clear. In the former East Germany, the historical buildings are in a worse shape, the houses are shabbier and people’s English level is poorer. I remember a couple of years ago when I was in the city center of Erfurt, a major city in former East Germany, for 20 minutes I could not find anybody who actually spoke English. This would not happen in Cologne or Hamburg. Of course the young generation is speaking better English but the division could still be felt.

When I was just contemplating about the division between these two parts, a car sharply stopped right in front of me. There were a couple inside, they opened the door and said: ‘Come on in! Where are you going?’

This lovely couple were artists from that area. The man was German and the woman Italian. The man was almost 80 years old and the woman not 50 yet. They were such enthusiastic and open-minded people! 🙂 The journey on that day became perfect simply because I met them. Although at such an advanced age, the man was still very energetic and he was on his way to play football with friends from Syria, Poland, Turkey, Italy, Spain, etc.. He had been playing football every week for years. I could not imagine my own grandpas playing football at 80. At most they would do some slow motion Tai Chi. He drove fast, like a young fellow in his 20s and he talked fast like lightening. They met through art. Now they lived together in a house in this part of German countryside.

The thick trees were flashing by like dreamy We were avidly discussing traveling, art and this part of Germany like that was the only day when we were allowed to discuss them.

They: You have no idea how narrow-minded people here are! WOWO! If they see you  are from another country like Italy, they will think you are weird. it’s so difficult to live here. As for you, hitchhiking will not be easy!

Inside their hearts, they were in their 20s. That was the most admirable beauty of them. They avidly invited me to their house and showed me around, telling me about their paintings, sculptures and plants, like all those were their babies. They grew vegetables in their garden and before I left their house, they gave me a big courgette,

‘Here! Share it with those wonderful people you are going to meet at the hitchgathering!’

I felt that they were like the fairies living in the Eastern German forest, never getting old and never sad, laughing at all the difficulties of human kind and living happily for ever and ever. I bet if ten years later I returned, I would find them there again, avidly making their sculptures and showering me with courgettes.

They drove me still further, to a good hitchhiking spot they used before. Although then they had a car, they still possessed the spirit of hitchhikers, believing in the kindness of strangers and the beauty of the world.

I was dropped at a rather desolate road among big trees. It was one of those Wendish villages I reckoned. After so many legends, finally I saw a real one. 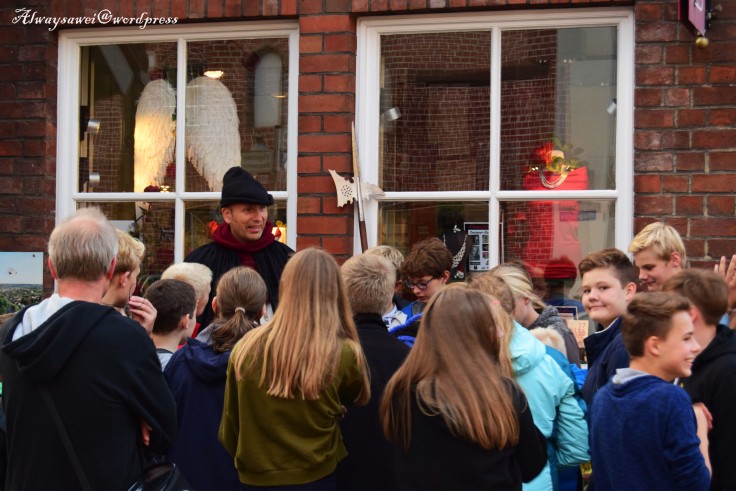 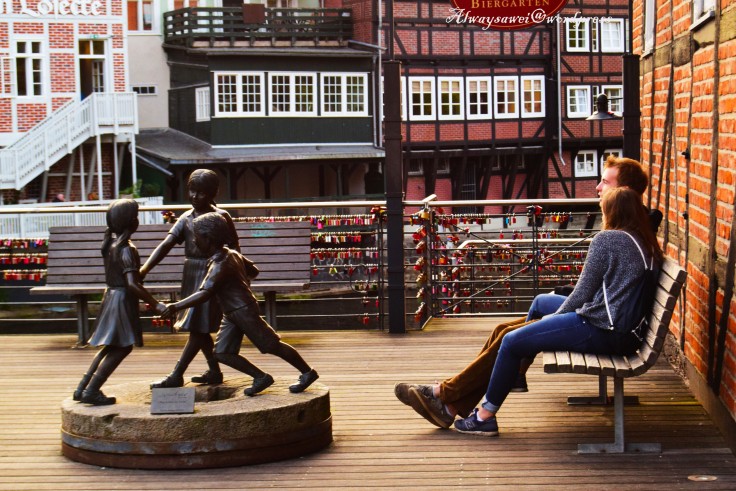 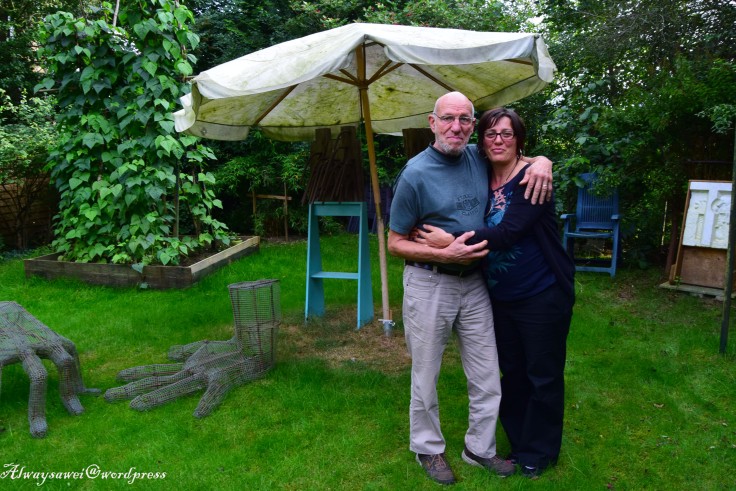 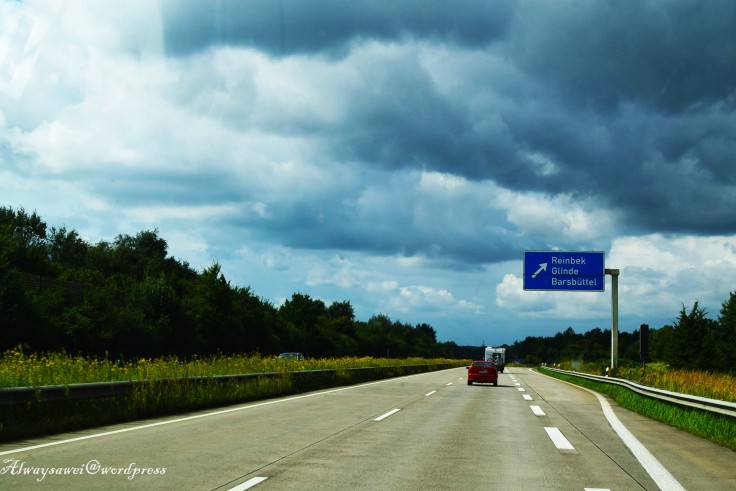 Stuck in the 19th Century and the Cold War Era

There I stood, in the hot late afternoon air mixed with beech trees. As the place I was going was really small, there were no big roads leading there.

Every 15 minutes a car passed. I felt anxious, as my destination was less than 30 km away but there was not much traffic. Seriously, 30 km! I could almost walk to Riebau! Nope, I did not need to walk! The 4th car passing by stopped. Inside was a Polish couple. They lived in a town just 10 km ahead. The man had red face from the sunshine and the girl was a bit reserved, but as soon as I told them that I lived in Poland and loved their country they started talking to me like old friends.

Before they turned, they drove me a bit out of their way to a bigger town, where I would have better chance of getting a ride.

Once they left, I had a look around and realized that I was now on the border of Former East Germany and West Germany. In the time of the Cold War, this border was tightly guarded. There would be soldiers with loaded machine guns on watch towers on the eastern side, ready to shoot anyone trying to flee to the west.

The big town was more like a big village, with only one street and two rows of houses. The houses were old, broken and the paints came off. When I was just walking on the only street, I felt I was back in the 19th century. There were no high buildings, the highest being the church. Yes, THE church. There was only one church. Some farmer kids dressed in traditional clothes came out to play, their hands and faces dirty with mud from the fields. The little girls had scarfs covering their hair like in the old days. When they saw me they immediately ran away, like I was an alien or some unimaginable person from a distant future. A few vehicles passed, all carts pulled by houses. Even the farmers driving these carts were dressed like in those old photos of the 19th century.

I was surprised, amazed and well, stuck. No cars here. The carts did not stop either as they were too shocked to see an Asian guy in this part of their world and forgot to stop even if they wanted. I felt like an intruder.

I walked and walked, passing numerous carts and eventually found a crossroad which was exactly where the old border between the two Germanies was. There was a showcase on the road side. Inside there were old newspaper cuts and photos from the Cold War Era, telling stories of the border in the past. There was also a gas mask, some barbed wire, the old sign of ‘Attention! Middle of the the River Is Border! (Achtung! Bachmitte grenze in German)’ and a mini model of the border checkpoint at that time.

I felt I was on a journey through the past, through the Cold War time. The road I was standing at that very moment was the edge of the Iron Curtain. 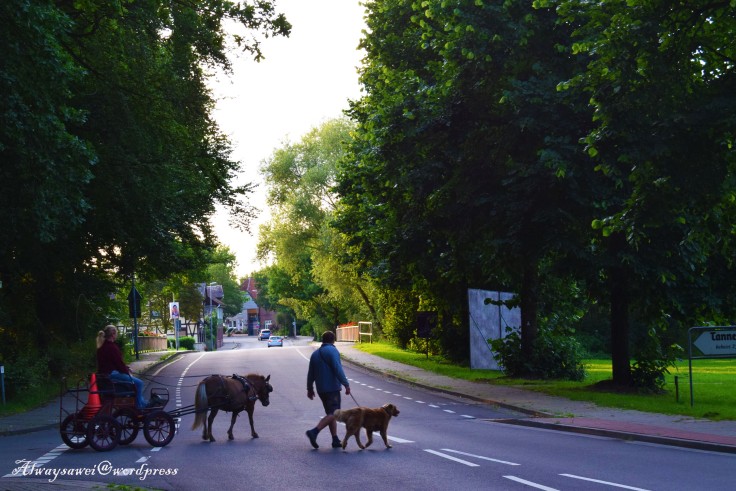 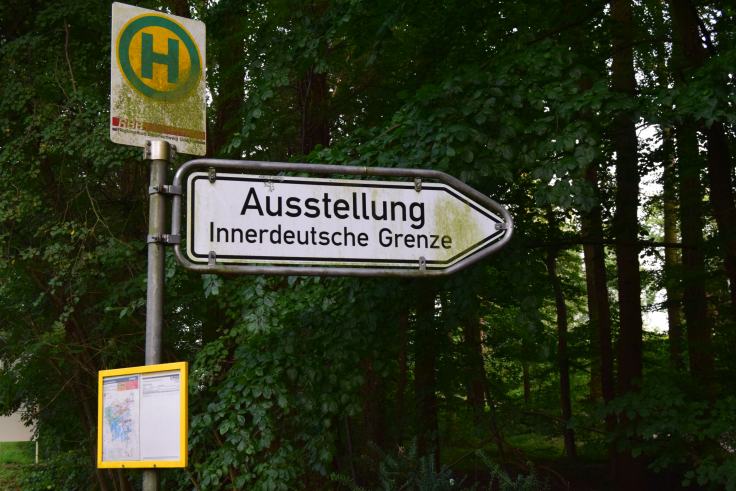 Du du du …… A tractor passed, which shook me out of my 19th century dreaming.

Yes, I still needed to catch a ride. It was getting late…… In front of me there was an enormous corn field, which reminded me of the Midwest of US. I was thinking about camping among the corns and eating them if hungry when a van stopped.

There was a woman about 40 years old and a young Turkish guy inside. The guy was driving. The woman was blond and I presumed that she was German, so I asked her in German: ‘Excuse me, are you going to Salzwedel? or anywhere near that?’ She was confused and said in English: ‘What? What did you want?’ I immediately recognized her Dutch accent in her English and switched to Dutch.

I: I am going to a small village called Riebau. It’s near Salzwedel and this road leads to Salzwedel. I am hitchhiking, so I am thinking if you could take me along.
The woman was obviously tired but she opened the door of the van and said: ‘Come on in!’ The young Turkish man was smiling all the time and did not talk much.

Where is Riebau?
It is near Salzwedel.
So…… where is Salzwedel?
Come on, it is the birth place of Jenny Marx, the wife of Karl Marx! It even has a population of about 20 000! You don’t know it? Hopeless……

Just kidding. Salzwedel is really small and Riebau is even smaller. I would genuinely be shocked if you know these two places. 🙂

Those two lovely people from the Netherlands also had no idea where Riebau was. I showed them the spelling and they looked it up on their phone for 10 minutes. Then we drove on.

Soon we entered the even more rural countryside, only passing occasional solo houses from time to time. Then I really agreed with the Polish couple — the village where I just stood was indeed a big town.

They were going for an appointment but still they insisted to drive me directly to my destination, which was really not easy to find, even with GPS. After about half an hour  of crossing hills, fields, rivers and cow herds, we arrived in Riebau, a village of 305 people. I thanked them repeatedly and they drove off.

I thought: indeed as the German-Italian couple told me, this area was not easy to hitchhike if one looked foreign as the locals would deem you weird. All these 3 groups of people who gave me rides were foreigners.

I had a look at this village. There was not even a single soul on the street and some houses looked deserted already for at least 30 years. The road was cobbled and badly maintained. Did I just come to the wrong place? This village was too quiet for any gathering, or even for any living human beings to exist.

and suddenly I heard a shout…… 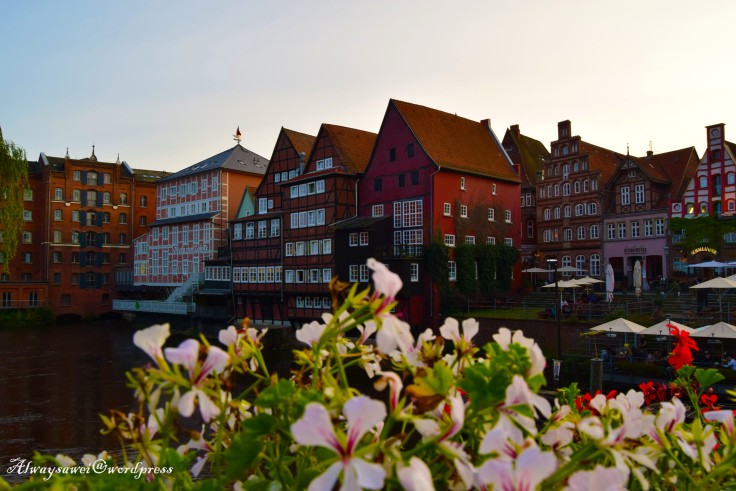