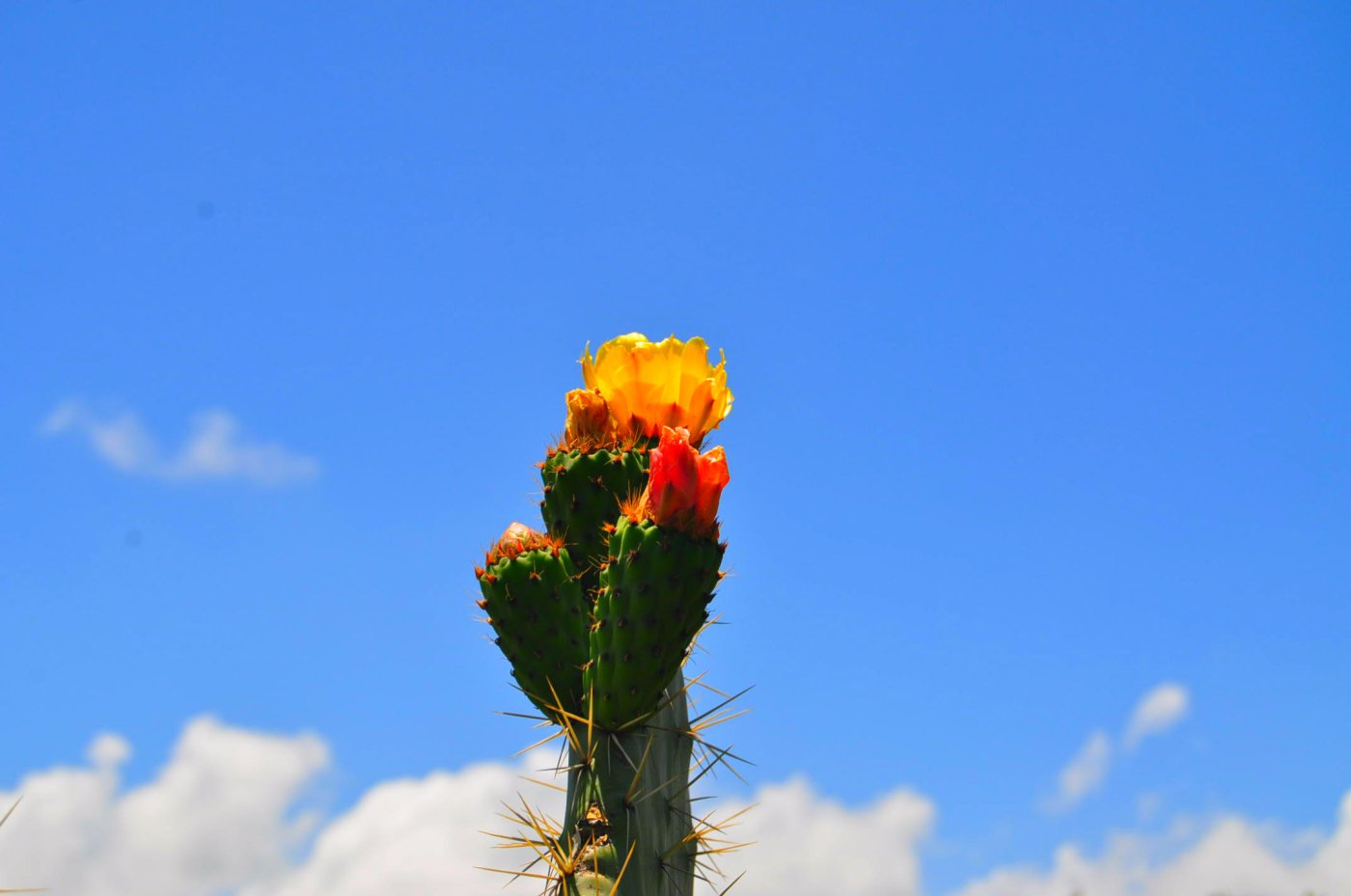 There Are Good People In Every Country

I finished my volunteering in Entebbe and answered the call of the ROAD — I started my hitchhiking trip in a sunny afternoon near Jinja, Uganda. The plan was to hitchhike from Uganda to Kenya, then Ethiopia, Sudan and all the way to Egypt, where I would swim across the Mediterranean Sea to Cannes to attend the Cannes Film Festival.

The road was rather shabby and the green crops around me stopped any wind. It was disgustingly hot. A truck soon stopped. When the door opened, I saw a driver glistening with sweat and a solider with a machine guy. They shouted to me: ‘Where you going?’
I: To the border with Kenya! Where are you going?
Driver: Eh…… OK, how much do you want to pay?
I: What? I am hitchhiking……
Driver: How about 50 USD!

WOWO! That would be much more expensive than even renting a private taxi. No doubt, like most sub-Saharan Africans, they thought every Mzungu was hundreds times richer than themselves.

I shrugged and said:’No, It’s all right. I am a poor student and do not have much money. I will wait for somebody willing to take me.’

The solider grabbed his machine gun, an AK47 as I reckon and put up a stern face to me, shouting: ‘Hey! This is Uganda! You want to go, you pay! 50 dollar! No less!’ His gun was shinning like his skin, like a gun could also sweat. It was not my first time to encounter armed soldiers, friendly or not. I knew he was just bluffing. If he really killed me, the embassy would press the Ugandan government to do something.

I sneered and said with a cold voice: ‘I have hitchhiked in more than 50 countries and in each of them, I find kind and generous people. Even in Uganda, days ago I a lovely Ugandan couple drove me to Congo. This is indeed Uganda, but I am not going to pay the 50 dollar to you.’

He was taken aback for a second and relaxed his posture: ‘Eh…… Seriously? You been to 50 countries? Even Congo! Oh don’t go to Congo! People there bad! Uganda people, good!’ The driver then stared at him like saying ‘So…… Uganda people are good? and you were  just threatening him with your gun 10 seconds ago? Are you suffering from dementia or schizophrenia?’

The next minute the solider put his gun aside and started to make space for me. They quickly had a discussion in Luganda. Then the driver jumped off the truck and invited me in. I looked at the door at the other side of the truck and said: ‘Isn’t it easier if I just enter the truck from that door?’

They both laughed. Just when I was totally confused, the driver pushed me on my shoulder and asked me to hurry. I thought perhaps the other door was broken, so I shrugged and jumped into the truck. Once I took my seat, I saw that on the ground next to the other door, there was a bunch of AK47 piled up, essentially blocking the door.

I shivered for 10 seconds and before I knew it, the truck rowed on already.

Solider: So, Ugandan people, good?
I: Yes! There are good people in every country, of course also in Uganda. I have many Ugandan friends, in Entebbe. Oh, do you like the president?
Soldier: Ah! President Museveni! Good man!

Museveni was (and still is) the president of Uganda. He had been in power for about 30 years and was accused of manipulating several elections. My best Ugandan friend Mugabi was a youth leader of the biggest opposition party in Uganda. Mugabi and his friends were put into jail many times when the president oppressed the campaigns of opposition parties. Museveni got power because he was involved in the rebellion which toppled Ugandan dictator Idi Amin and Milton Obote. He promised to step down after one term of presidency, but 30 years later, he was still the president. Essentially, he was just another dictator. However, he indeed had supporters, especially those who worked for the government and army.

They were not going to the border and actually they could only take me for 20 km. I said goodbye and jumped on the ground again. 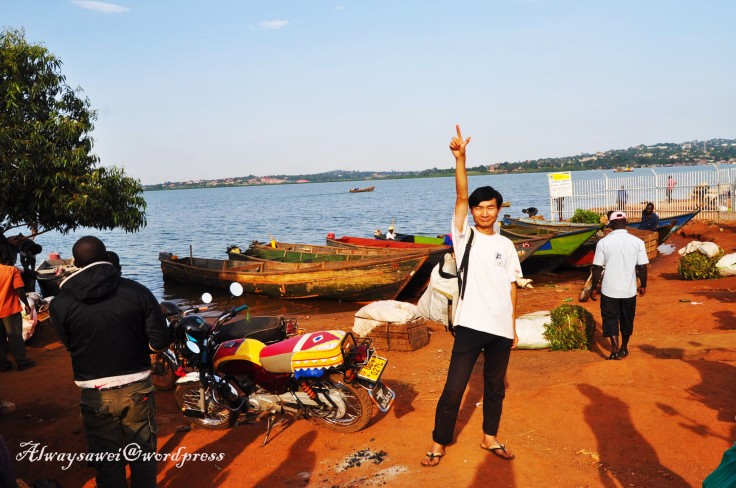 The Benefit of Having An Average Face

It was dusty and hot. This place was far from any major cities or villages. The only human trace I could see were the cultivated fields, some crops and some tea trees. I checked the time. It was 5 PM and in 10 minutes only 1 vehicle passed, which was a motorcycle carrying 3 people…..

One hour later I started considering the possibility of camping among the tea trees when…… a shinning new car stopped!

I walked to it slowly, as I was not sure if it was for me. An Ugandan dude opened the door with a shinning smile. I was just about to speak when a laughing voice came out of the car and said in Chinese: ‘Haha! Come on in!’ I was shocked first and when I entered the back seats I saw this young Chinese guy on the co-pilot seat. As the car started again, he took off his sunglasses and looked at me.

(Let’s call this cool Chinese dude Da.)
Da: I really thought you were my high school classmate, so I asked my driver to stop. I was wondering “How on earth did Wen Zhang get here?” When you came near, I realized you were much taller than him. Haha!
I: That was the benefit of having an average appearance! Haha!
Da: Where do you want to go?
I: To the border with Kenya.
Da: Normally I would surely take you all the way to the border, but today I have a meeting in the camp. I work for CRCC (China Railway Construction Corporation) as an interpreter. We have a road building project not far from here. We have been here for two months but could not start the work. Seriously, the local Ugandans are really not efficient or organized. We needed a certain component for our generator. I went to a shop to buy it in Jinja. The shopkeeper said it would arrive the next week, so we paid and the next week when I came back. It was still not there and he promised to deliver it the next week. Thus I have come to Jinja 3 times and still have not received the component.
I: Yes, talking about efficiency, Ugandans are surely not the best, although they are good in other aspects. So how is your life in Uganda?
Da: Life? Well, it’s mainly work. You surely have seen how poor the country is. There is much to build but the living condition is dire. Working on roads means we have to stay in the middle of nowhere for one to three years. Our camp is in the middle of nowhere. The only neighbor we have is an Ugandan priest preaching to the nomads. I do think your traveling is awesome but do take care, Africa is not as safe as Europe or China.

The priest who lived next to them had a car. On the road at night sometimes there were bandits stopping vehicles and robbing people. There were also killings. One night the priest was driving home. Of course there were no road lamps. Suddenly he saw several big dudes standing in the middle of the road, signing him to stop. He was scared and pushed the accelerator and drove through. ‘Bang!’ the car hit something but he was too scared to stop. When he finally got back home. He locked himself up at home for a week. He was scared and at the same time, he felt sorry for hitting people to protect himself.

In their camp they had many vehicles and since their camp was far from any cities, they had their own big gas tank. However, as the managers of the project discovered, some gas was stolen every night. Therefore, they hired armed guards. For one week the stealing stopped. Then it started again. As Da practiced Kungfu when he was young. The managers decided that Da would hide in the shrubs near the gas tank and catch the thief. After sleeping all day, Da woke up at 8 PM, got dressed in black and hid himself well in the shrubs. 5 hours later he heard some noise approaching the gas tank. He got ready, fists clenched…… Then the noise disappeared. So the first night he did not catch any thieves, neither the second or third night. He was puzzled: ‘How could they know I was there?’ Then he realized that it was his skin color which was too visible in the dark…… (I know, it sounds a bit racist, but that is what he told me. I am just retelling the story. Just to be crystal clear: I am not a racist. 🙂 )

When he was about to turn, he drove me to a stop where there were two shared taxis, basically private vans which were the most common public transport in Uganda. Although I desisted, he still bought me a ticket and gave me 50 000 Ugandan Shelling (about 12 USD). He warned me repeatedly about the security. We exchanged contact and I promised to treat him to some awesome food when we meet again in China or somewhere else. Then he drove away.

When I finally reached the border city Busia, just a few steps away from Kenya, it was totally dark already. 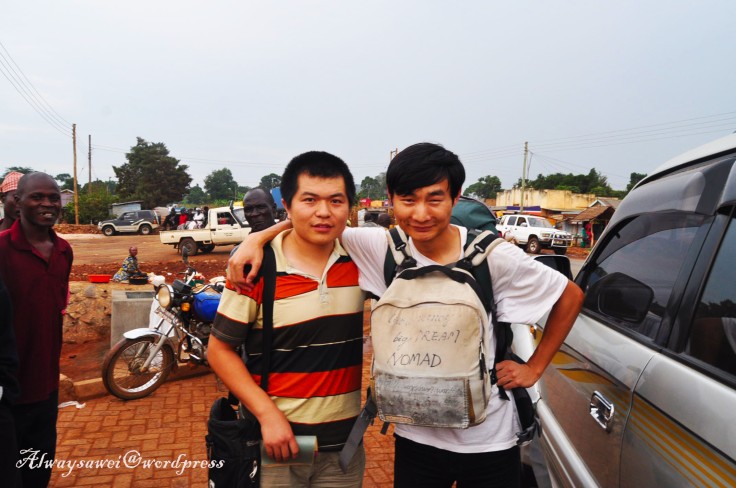 4 thoughts on “The Surreal Experience of Hitchhiking in AFRICA!”