I landed in this “relatively big” station named Lopburi at half past midnight. It was all quiet. The conductor who escorted me out of the train talked to the train staff in this station and they got the idea that they should try to put me on the next train, which was to my knowledge also full and I was also not planning to use the not-so-much Thai butt I had in my pocket. I have to admit that I was not the least worried. When I first started travelling, I used to worry. When I had too many things with me, I used to worry. When I had too much planning, I used to worry. But by and by, I had forgotten what worry means. Worry was not in my category of emotional status anymore. I could briefly be disappointed, sad, furious but worry had disappeared, leaving even no trace at all.

I was excited that I finally got out of Bangkok and shinning fresh adventure was on the horizon! I was so excited that I immediately found the only people I could talk with in the station — a young Scotish-Dutch couple waiting for the next train to Chiangmai, and started chatting. I did not remember much what they said. I asked what the most exciting thing they had ever done was and they told me it was this trip in South East Asia, although their way of travelling did not sound exciting to me.

To be honest, they were neither energetic nor impressive. The station was all quiet again. In Thailand most train stations were open — there were not walls on every side separating them from the outside space. The pleasant breeze strode in the empty waiting hall and stroked my face, lighting a smile on my face. I casually looked around. The real passengers were only the 3 of us. A few others were also in the waiting hall, but they were seemingly homeless people simply “couchsurfing” benches there. I would join them soon in the “bench surfing”, preparing for hitchhiking of the next morning. Soon a young English speaking train staff came to tell me that he could help me. I told him that I did get enough Thai butt now for the train ticket, but the problem was that if I wanted to buy the ticket to Chiangmai, I would have to use most of it and that would render me in a dangerous situation and therefore I would save this money and hitchhike the next day. Moreover, as I knew, the next train was also full…… which was confirmed by the Scotish Dutch couple, who got the last beds of that train.

The young train staff looked really worried but I assured him that everything would all work out! Still, he looked much concerned and tried to figure out the best way to help me. He came up to me several times afterwards and offered several other possible solutions, including using my money to take a train back to Bangkok and get help there. I had to refuse his kind advice but thanked him again and again. There lay the thing that always touched me when I was on the road — simple and pure kindness of those I had never met before and would probably never meet again and also the thing I felt most guilty of in my journey — the worrying looks I brought on their faces. That was why I always tried my best to assure them that I was confident, capable and even experienced in this kind of shit.

The next train came. Yes, it had been indeed fully booked. The Scottish Dutch couple were gone and I became the only “passenger” left and had ample options to choose a spot to spread my sleeping bag and have a lovely dream. I chose a bench quite at a corner and lay down my sleeping bag. When I was lying there, with my scarf covering my eyes from the light, I remembered one thing the young couple said — there were monkeys, very aggressive ones just about 5 minutes walking away from the train station. I had never met aggressive monkeys before and was very curious to see them, although judging from the face expressions and the tones of the young couple the encounter could be rather unpleasant. When I was just contemplating this prospect, I felt into sleep.

I was awakened once by another train staff at about 5:00 am and he asked me if I was going to Bangkok. How kind he was! He was worried that I would miss my train since the train to Bangkok was coming in minutes. Half in my dream half in reality, I said:”first let me sleep, then I will see where I go. S…S…Sleep first……” Then I slipped back to complete dreaming. The next moment I woke up it was already a sunny morning. The tourist information office beside me was already open. I went up to ask for a free map of Lopburi and tried to figure out how to reach the highway to Chiangmai. The guy was very helpful and told me that there were also things to visit in Lopburi and the sights were really not far from the train station. So I left the tranquil little station, which had now an orange tint in the air, painted by the newly risen sun, and disappeared in the small town.

Actually it was pretty hard to disappear as a tourist in a small town. No sooner I stepped out of the train station than several taxi drivers came up to me…… Sorry guys, no business for you.

I walked on and saw some pretty cool pagodas inside walled parks, like those in Ayutthaya but simply less impressive. It was early in the morning and it would have been easy to sneak in since the ticket booths were not there yet, but I was just not much impressed or intrigued UNTIL I saw a big colony of monkeys jumping around in a park, flying about some pagodas! I was innocent and naive, as you all know. 😉 I had my water bottles in a open bag on one side of my backpack and some food in plastic packages on the other side. When I was about 10 meter away from the bustling colony, the strong smell of monkey pee and shit rushed into my nostrils and I started frowning. The next moment I felt about 5 monkey jumping onto my backpack, one by one! They were not after good, I realized! I tried all my best to throw them away. I started first to rotate like our planet, first clockwise. It did not help… Then counterclockwise, it did not help either… I could feel that they were climbing, crawling and rummaging…… I started to dance! Then run, then dance, then run……”Ah!!” I shouted. — One monkey had already started exploring my hair with its claws… God! They were stubborn! I also did not want to hurt them …… The next moment I suddenly saw them jumping down and running away like triumphant fugitives, with my food and water bottle!!! “Ah! That’s my water bottle!! and food!!” I shouted. I was first in shock. then almost in tears…… 😦 That bottle…… that bottle I bought it in Guangzhou about 2 months ago and it had travelled with me from Guangzhou to Beijing and then all the way to South China then Laos and now Thailand!! It was a veteran and my companion!!! 😦 😦 NO!!

It took me about half a minute to return to my senses and for my brain to start working analytically again — Those “assholes” were so agile that no human being could follow them. I gazed afar at my already former water bottle helplessly and started recalling all those happy days it spent with me.

That was not their only colony by the way. Soon I spotted several other vibrant colonies. Now I had nothing to be robbed of anymore and I could just stand there and observe them. Some were rummaging garbages and some were jumping on electricity cables and roofs. Hopefully they would not be criminal enough to committ any buglary…… Their pee and shit could be seen and smelt everywhere in that area. It’s their kingdom. However, it seemed that they stuck to their territory very much and hardly moved out of it, so soon I was safe again.

I had been on the road for one and a half years and that was my FIRST time to get robbed!!! 😦 😦 Worst of all, I could not even report to the police. Even if I reported to the police, I did not think they would be able to catch the fugitive, who was so skilled in its profession and backed by such a powerful and organized mafia family. 😉 The only thing I could do was to pray to the God of Travelling and call out Him to send the monkey police or even better, deploy the monkey soldiers to save me. 😉 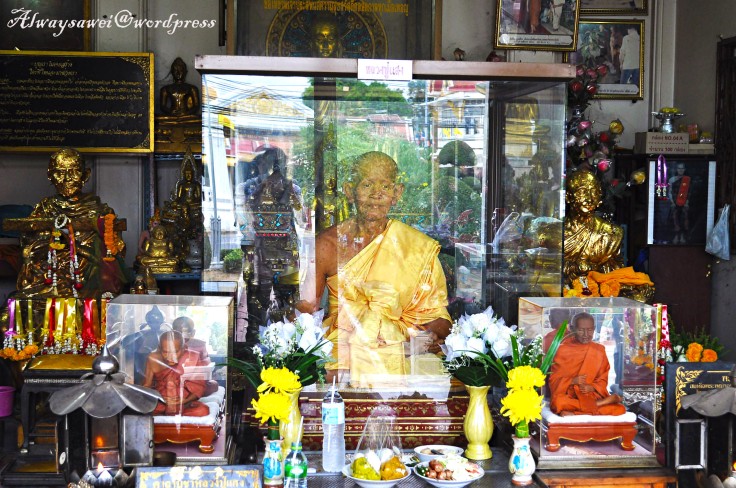